Look at me posting three days in a row. And with three blog tours no less! I will admit that I’m most excited about this one as I’ll be talking about my favorite book I read as a BBNYA panelist in 2020. It’s a superhero story that focuses on a supervillain who isn’t all he seems to be. I’m talking about Fid’s Crusade by David H. Reiss! Spoiler alert: I loved this book and I’m so excited that it won second place in last year’s BBNYA competition!

But, before I get to the tour post, what is BBNYA? BBNYA (Book Blogger Novel of the Year Award) is a yearly competition where book bloggers from all over the world read and score books written by indie authors. If you are an author and wish to learn more about the 2021 BBNYA competition, you can visit the official website (https://www.bbnya.com/) or our Twitter account, @BBNYA_Official. If you would like to sign-up and enter your book, you can find the BBNYA 2021 AUTHOR SIGN UP FORM HERE. Please make sure to carefully read our terms and conditions before entering.

BBNYA is brought to you in association with the Folio Society (If you love beautiful books you NEED to check out their website!) and the book blogger support group TheWriteReads.  I received this book to read and review as part of the BBNYA 2020 competition organized by the @The_WriteReads tours team. I want to thank them so much for sending me a free copy of the e-book so I could participate in the awards! All opinions are my own, unbiased, and completely honest. 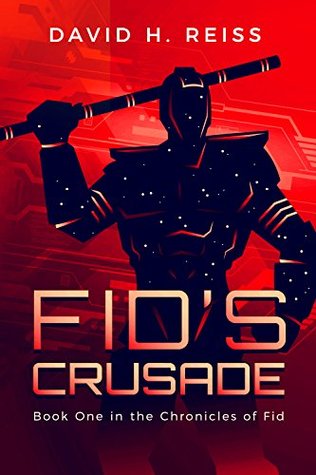 “Rage, grief and guilt have fueled Doctor Fid’s endless quest to punish the unworthy and he has left a long trail of blood and misery in his wake. For more than two decades, the sight of the villain’s powered armor has struck fear into the hearts of hero and civilian alike! But when a personal tragedy motivates Doctor Fid to investigate a crime, he uncovers a plot so heinous that even he is taken aback.

Haunted by painful memories and profound guilt, the veteran supervillain must race against time if he is to have any hope of confronting the approaching threat. Every battle takes its toll…but the stakes are too high for retreat to be an option.

In the end, it may take a villain to save the world from those entrusted with the world’s protection.

While growing up, David was that weird kid with his nose in a book and his head in the clouds. He was the table-top role-playing game geek, the comic-book nerd, the story-teller and dreamer.

Fortunately, he hasn’t changed much.

David is a software engineer by trade and a long-time sci-fi and fantasy devotee by passion, and he lives in Silicon Valley with his partner of twenty-eight years. Until recently, he also shared his life with a disturbingly spoiled cat named Freya.

(Farewell, little huntress. You were loved. You are missed.)

Fear not…Two new kittens have since crept into the household and are working tirelessly to repair the hole left in the author’s heart. David’s first trilogy, the Chronicles of Fid, has just recently been completed; these were his first novel-length projects, but they certainly won’t be his last—he’s having far too much fun!

I was the kind of kid that often found the villains in Disney movies more compelling than the main characters. So, when Fid’s Crusade promised me a tale told entirely from a supervillains point of view, I was immediately onboard! This story follows the diabolical doings of Doctor Fid, one of the world’s foremost supervillains. But it also gives us a peek at what made Doctor Fid, what caused him to gravitate towards a life of violence and crime. And it shows us what happens when a supervillain finds he wants to fix a world that has wronged him and not simply destroy it.

My absolutely favorite aspect of this book has to be the characters. Specifically our main character, Doctor Fid. I’ve said I like a multi-faceted character and Fid is that in spades! I’ve always found antiheros fascinating because there is such a juxtaposition in their character. In Fid’s case, he is violent and has questionable morals, but he is also trying to make the world a better place. He’s willing to put his neck out there to help the ones he cares about, but he will won’t hesitate to mess someone up if they go against what he thinks is right. Fid is a mess of contradictions and I loved him for it. I loved following his journey to not only becoming the notorious villain that he is, but to where he’s headed as his mission in life subtly starts to shift. I also enjoyed learning more about some of the superheroes introduced in this story, though most of them come across as overly aggressive meatheads.

Another aspect of this book that I enjoyed was the world-building. David Reiss takes his time constructing his world so that it’s easy to get lost in it. I found myself completely immersed in this alternate reality were superheroes were a thing and not all of them are as altruistic as one would believe. I will freely admit that some of the science talk left me head spinning, but it didn’t take me out of the story. It just made me that much more intrigued! Reiss created a story that I was happy to sink into and it made for quite a fast read! It’s not a linear timeline which did lead to some confusion on my part and I felt as though the pacing lagged in a few spots. Overall, though, I was fascinated by this wonderfully crafted and nuanced world!

Final thoughts: This story is cleverly written and will engage you from beginning to end! The concept is fantastic and I think David Reiss does an excellent job executing it. The non-linear timeline can be a bit confusing and the pacing slows a bit in certain sections but, overall, you will find that this is a quick read that will capture your imagination! The best part of this story, hands-down, is our main character, Fid, who I found so relatable, even as he was suiting up in his mega-evil-villain armor. If you’re a fan of superhero movies who often finds themselves drawn to the villains, I think you would love Fid’s Crusade!

Rating: 4 out of 5.
Advertisement