It’s my stop on another Storytellers On Tour blog tour today. I’m excited to talk to you about a fantasy novel that captured my attention called Oathbreaker by A.J. Rettger! This book features knights, elves, and a heaping helping of intrigue.

Before I continue, I want to thank the wonderful folks at Storytellers On Tour and the author for providing me with a free e-book in exchange for my participation with this tour! I always appreciate being able to help promote books and that’s especially true for indie authors. Also, if you’d like to visit any of the other stops on this fabulous tour, click the banner below to go to the tour schedule:

Now, let’s get to the post! Oh, and keep reading til the end for a surprise! 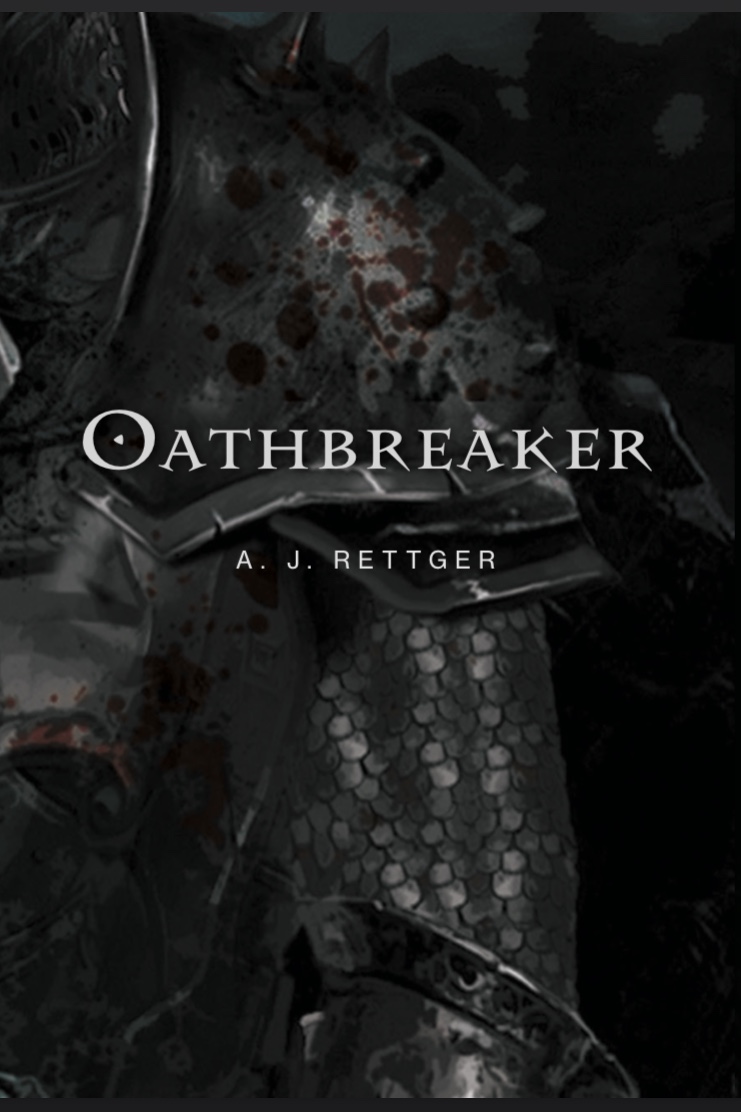 “For thousands of years, elves and non-humans alike had lived freely until humans colonized their land and forced them into hiding and subjugation. After years of living as slaves or second-class citizens, the elves rebelled, but their uprising failed, and humans remained victorious.

Mario Deschamps, a new graduate of the Knight’s College, sets off to complete his first deed, an accomplishment that will grant him knighthood and into the ordo equestris. But he has huge boots to fill. His late father, a famous knight and considered the Scourge of Bandits, single-handedly ended the Elven Uprising. Mario’s youthful confidence, vanity, and naivety don’t get him far in the real world, and he quickly finds himself trapped in a political climate where tensions are on the rise and war is inevitable.

In a world filled with monsters, outlaws, bounty hunters, demons, and murderous bandits, Mario is forced to make tough moral decisions. In a world fuelled by violence, hate, and bigotry, things are not as clear cut as he once thought. Lines have been drawn, but to complete his task, he must cross them all. With every choice, the consequences weigh greatly on him, leaving him full of guilt and doubting his path . . . and all the while, in the darkness, someone-or something-is waiting for him to break . . ..

A.J. Rettger weaves an epic tale of politics and prejudice, war and depravity, and legacy and destiny in his action-packed debut fantasy Oathbreaker….”

A.J. Rettger lives on a farm near the small town of Aberdeen Saskatchewan with his dog, Zeke. He has a bachelor’s of education degree, as well as a certificate from a private vocational college. His hobbies include playing Dungeons and Dragons, listening to heavy metal, and reading and writing fantasy books. Oathbreaker is his first book.

As a hardcore fantasy fan, I’m always excited to explore a new world. Fantasy is such a broad genre that can be employed in so many different ways. It’s been awhile, though, since I’ve picked up a book that features knights, elves, and political intrigue, so this book caught my attention!

In Oathbreaker, we’re following the adventures of a young knight-in-training, Mario Deschamps. Mario has been training his entire life to be a knight, having grown up on the heroic tales of his father, Pablo Deschamps. His father is said to have single-handedly ended the Elven Uprising years ago but, unfortunately, went missing right after. Mario dreams of being as great a knight as his father so, when he graduates from his training and heads off on his first quest, his head is filled with the possibilities. The truth of being a knight, however, and the state of the world is soon thrust upon him and it’s nothing like he dreamed.

This was an interesting story that hit a lot of the classic fantasy beats. There’s a naive, young knight that goes out in the world to discover it’s not everything he thought it would be. There’s a disenfranchised race that must deal with rising tensions. There are shady political machinations that cause unrest. Yes, this one is a on the darker side, but I definitely enjoy some darkness in my books! This is a solid, fantasy tale that felt like climbing into a comfortable pair of sweats. Nothing blew my mind but it’s familiar and I had a good time reading it!

My favorite aspect of this story was definitely the world-building. I was fascinated by the world the author created and wanted to know more! I found the interweaving of various mythical races interesting and enjoyed the way the background was woven into the plot. The world-building never felt info-dumpy, which I always appreciate!

I also thought the pacing of this novel was well done. There was never a moment that lagged or felt dull. I was always intrigued and invested in the story. It definitely captivated my imagination! I will say that I didn’t always jive with the writing. Some bits just seemed a little overwrought to me and took me out of the story. But, overall, I still found myself sucked into the story and this was definitely a fast read.

Final thoughts: This was well-crafted and fascinating story with excellent world-building! I was captivated from beginning to end, though I didn’t always get on with some of the writing. This is definitely on the dark side, so make sure to check content warnings before jumping in if there are certain subjects you’d rather avoid. All in all, this was a solid fantasy story with secrets, politics, and a main character that grows a lot over the course of this short tale. If you like dark fantasy with great world-building, heaps of intrigue, and fascinating characters, I think you’d enjoy Oathbreaker!

That’s right! Storytellers On Tour is running a giveaway for a signed paperback copy of this novel! See the details below and click the banner to sign up!