We’re keeping the blog tour train rolling, but this time I’m teaming with the ever fabulous Storytellers On Tour! And, when I say this was an epic tour to participate in, I do mean epic! The featured book for this is an incredible fantasy story that was a chonker, but felt like it just flew by. There’s magic, daemons, and high stakes that had me biting my nails. The book for this tour is The Blood of the Spear by Mark Timmony!

Of course, I’m just one stop on this magical, mystery tour. There are a load of wonderful bloggers and Bookstagrammers participating! If you’d like to visit any of the other tour stops, click the banner below to be taking to the tour schedule:

Now, before I get into the post, I want to take a moment to Timy & Justine @ Storytellers on Tour for allowing me a space on this tour. I also want to thank the author for providing me with a free e-ARC in exchange for my participation and an honest review. It is very much appreciated. Also, stick around til the end for details on a giveaway!

Alright, let’s get to it! 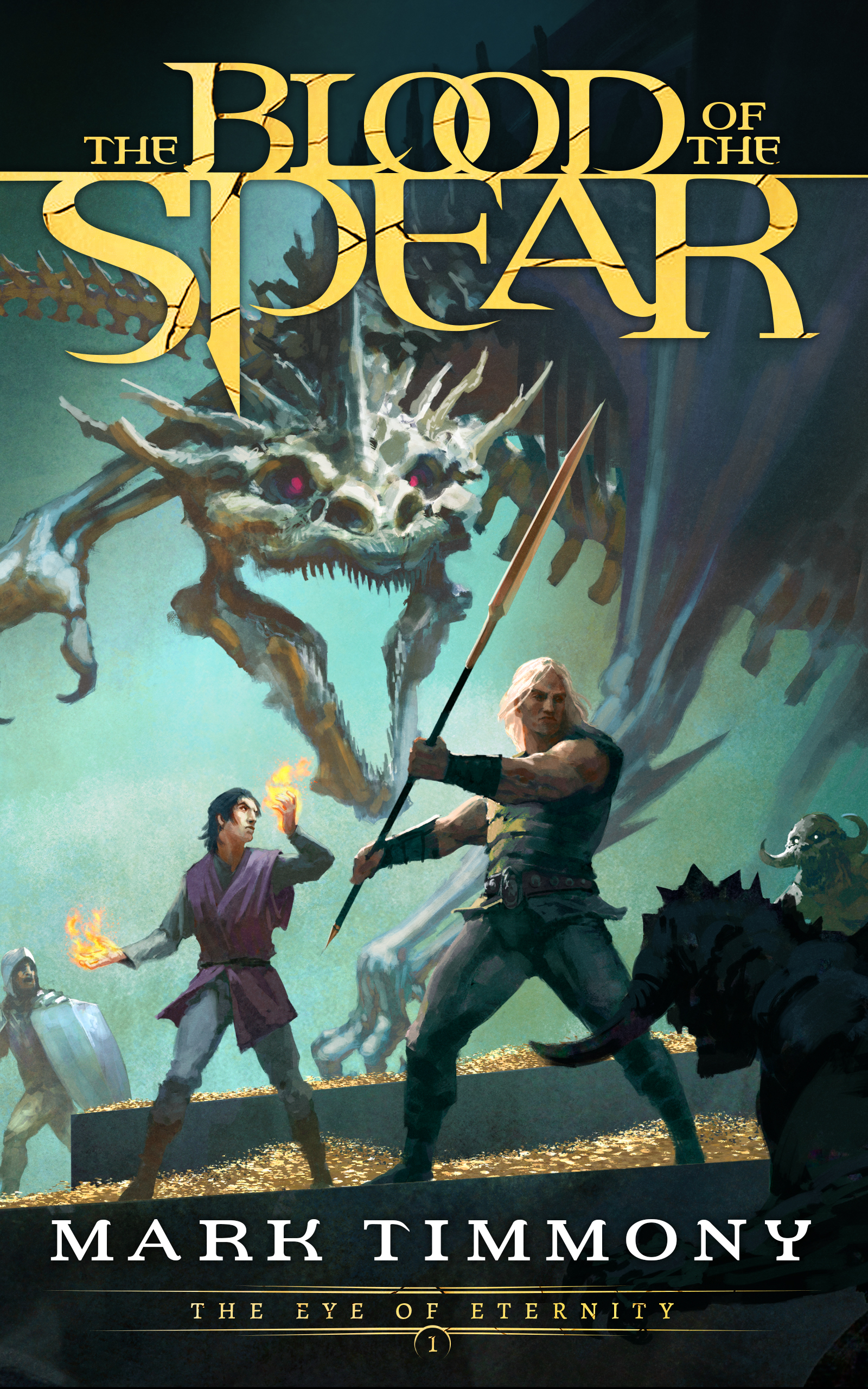 “Two brothers. One prophecy. A world in peril.

When Kaiel loses his chance to become part of the legendary Daemon Hunters, joining the Bronze Guard mercenaries seems like the logical alternative. It is an opportunity to put his training to use and, more importantly, as the company is currently in the employ of Prince Alesandr, it will allow him to keep an eye on his younger brother, Darien, who’s determined to follow his dream of becoming a Ciralys magic-user.

But the broken continent of Athmay still bears the scars of the war between the Summoners some three-thousand years ago, and an unexpected battle with a daemon – a remnant of that ancient war – reveals the brothers’ connection to a forbidden bloodline. Soon they find themselves on the run from the prince, daemonic hordes, and a prophecy that could break the world anew.”

I’m an Aussie, born and bred on Sydney’s Northern Beaches. I was never a sporty kid growing up, instead I developed a keen interest in reading and would spend every minute I could in the school library. Some might say I was ‘hiding’ in the school library, but to those people I say ‘ha!’. It was in the library that I first discovered ‘The Dragons of Autumn Twilight’ by Margaret Weis and Tracy Hickman, which opened the doors for me to countless worlds.

So, while my contemporaries were running around kicking a ball from one end of the school oval to the other, I was a mage cursed with eyes that saw the passage of time upon everything thing they looked at, I was an orphan taken as a slave by an invading army only to become the most powerful magician of his age. I lived the life of a lost warrior, a cowardly prince, a messiah who was the result of a thousand years of genetic manipulation. I was peaceful ranger, born amongst a cruel and violent kin and struggled to find my place and a home in a world where the colour of my skin tarred me with the reputation of my race. I was even a young girl who had the mantle of rulership of her House thrust upon her, along with the responsibility of destroying the enemies that killed her father and brother.

‘Hiding’ in the library let me experience life in hundreds of different shoes – and have more thrilling adventures than I’d find on the school oval kicking a ball around. It also lit the bonfire of my passion for epic fantasy, and I knew from the age of 15 that I wanted to write and give other readers the same experiences I had while reading the likes of Terry Brooks, David Eddings, Raymond E. Feist, Anne McCaffrey, Frank Herbert, and of course, Robert Jordan.

After I finished high school I worked as a mild-mannered shop assistant in a large Australian department store, helping customers in menswear by day then battling dragons and saving kingdoms at night while I read and began to write my own novel.

But it wasn’t until I scored a job at Sydney’s oldest genre specialist bookshop that I really began to make headway on my dreams of becoming a writer. It was there that I was lucky enough to meet many Australian fantasy authors – Karen Miller, Tony Shillitoe and Jennifer Fallon, to name a few – and was invited to be a beta-reader for a number of them. This unique experience offered me a peek ‘behind the scenes’ of novel writing with professionals, and went a long way in giving me the hands-on experience I needed in how to compose story structure, develop characters and build fantastic worlds, as well as offering insights into the business side – publishing and retail – of writing.

It was during this time that I managed to complete the first draft of what is today ‘The Blood of the Spear’ – although the book you’ve read (or are about to read) is a lot different to what I originally had when I wrote ‘The End’! After many revisions, and just a tiny bit of procrastination (don’t @ me!) I finally published my debut novel in May 2021. These days you can still find me on the Northern Beaches, and when I’m not writing the sequel to ‘The Blood of the Spear’, or reading, I’m likely working at Australia’s local bookstore, or playing World of Warcraft.

We all know I love fantasy, but what you may not know is that I have a complicated relationship with epic fantasy. I started, but never finished, The Wheel of Time series. I loved the beginning of that series, but that loved dimmed when the 12th or 13th book came out and it was still going. Perhaps it’s a stamina problem. (I have considered picking it back up, especially with the show coming out soon… but that’s neither here nor there!) So, whenever I come across the start to a new epic fantasy series, I always have some trepidations. But, when a book is as good as The Blood of the Spear, how could I not get sucked in?

There are a lot of threads we’re following in this story, but it focuses on two brothers. Kaiel was bound to join the elite Daemon Hunters but, when that chance is lost, he sets his sights on the mercenary group, the Bronze Guard. His brother, Darien, dreams of studying the magic of the Ciralys and is offered an opportunity he can’t pass up. Both of their decisions take them far from their homes in the Borderlands, but an ancient prophecy is what will truly put them on a path that will test their worth.

At 600 pages, this is a chonker of a book but, let me tell you, every one of those pages will have you on the edge of your seat! The action in this book was absolutely intense! The author has a way of writing a battle scene that makes you feel as though you’re watching a movie. I love when that happens, especially in epic fantasy! It makes me feel like I’m in the thick of it, which made the pages fly by. The pacing is very well done, the plot was enthralling, and I was a little sad when it was over! Of course, this is just the first book, so I have a lot to look forward to.

I thought the world-building was fantastic, as well. I could envision this world very clearly and, again, that added to the sense that I was watching this epic fantasy play out on a screen. I will admit to being a bit confused by the magic system and all the different fantasy names for different creatures (why are there so many things that end with “var”?!), but it’s not something entirely unexpected from the beginning of an epic tale. I do appreciate that, even with all the different and unique aspects of this world, it never felt like the author was just dumping information on me. It was always interwoven into the story in a pretty seamless way. That’s my favorite kind of world-building!

And we can’t end this review without talking about the characters. It’s funny… it’s been ages since I’ve read The Wheel of Time books, but as I was reading about Kaiel and Darien and Sim (among others!), I had an intense WoT flashback. But, don’t get it twisted, these characters aren’t carbon copies of Rand and his company. There’s just something about the lot of them that had that same feeling that I loved so much in the majority of the WoT series! I loved how this author built and developed his characters! They all have so much nuance and depth that, even though all these fantastical things are happening to them, I found it so easy to relate to them. Well… most of them 😂 I do love a story with incredible characters and this one is packed full with them! Sometimes the perspective shifts did leave me feeling lost in the weeds, and I had a few perspectives I enjoyed more than others, but I still loved following their journey.

Final thoughts: This start to a new epic fantasy makes me hungry for more! The plot is top notch and the action scenes will leave you absolutely breathless. The magic system can be a bit confusing, but, overall, the world-building makes you feel like you are a part of this story. There’s no info-dumping here and I loved that! The characters are incredible: complex, flawed, and interesting to follow, which is great thing since I imagine we’ll be with most of them for awhile! If you enjoy epic fantasy, if you love a rich and complex world filled with prophecies, daemons, and action, I think you would enjoy The Blood of the Spear!

Did this book sound intriguing to you? Well, why not enter for the chance to win your very own copy! Details are below.

For a chance to win, click the banner below!

4 thoughts on “Blog Tour: The Blood of the Spear by Mark Timmony”