Today, I’m happy to share my stop on the blog tour being hosted by the always fabulous The Write Reads! This time, it’s my pleasure to talk about a fantastic new science fiction that completely captured my imagination. Be prepared, y’all: this book is the epic beginning to a brand new series and it promises to be mind-blowing! I’m talking about Shards of Earth by Adrian Tchaikovsky!

Now, before I get into it, I want to send my usual regards to Dave @ The Write Reads for allowing me a spot on this tour. I also want to thank the publisher, Tor, and Netgalley, for providing me with a free e-ARC in exchange for my participation in this tour. It is always appreciated! And it’s especially appreciated when I end up loving the book so much!

But I’m getting ahead of myself, aren’t I? Let’s get to the post! 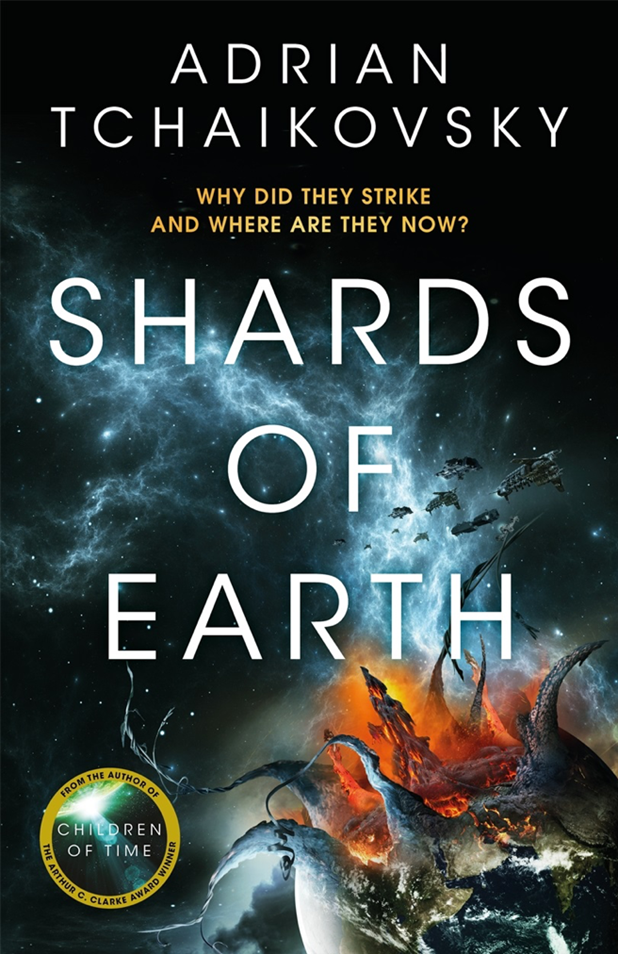 “This high-stakes space-based adventure will be perfect for those who loved Children of Time, also by Adrian Tchaikovsky.

The war is over. Its heroes forgotten. Until one chance discovery . . .

Idris has neither aged nor slept since they remade his mind in the war. And one of humanity’s heroes now scrapes by on a freelance salvage vessel, to avoid the attention of greater powers.

Eighty years ago, Earth was destroyed by an alien enemy. Many escaped, but millions more died. So mankind created enhanced humans ­such as Idris – who could communicate mind-to-mind with our aggressors. Then these ‘Architects’ simply disappeared and Idris and his kind became obsolete.

Now, Idris and his crew have something strange, abandoned in space. It’s clearly the work of the Architects – but are they really returning? And if so, why? Hunted by gangsters, cults and governments, Idris and his crew race across the galaxy as they search for answers. For they now possess something of incalculable value, and many would kill to obtain it.

‘Full of sparkling, speculative invention’ – Stephen Baxter on The Doors of Eden

Shards of Earth is the first thrilling instalment in the Final Architecture trilogy – by the Arthur C. Clarke award-winning novelist Adrian Tchaikovsky.”

Adrian Tchaikovsky is the author of the acclaimed Shadows of the Apt fantasy series, from the first volume, Empire In Black and Gold in 2008 to the final book, Seal of the Worm, in 2014, with a new series and a standalone science fiction novel scheduled for 2015. He has been nominated for the David Gemmell Legend Award and a British Fantasy Society Award. In civilian life he is a lawyer, gamer and amateur entomologist.

I make no secret that I’m more of a fantasy fan than an science fiction fan, but sci-fi has always held a special place in my heart and imagination. I think my tend to go more towards fantasy is that, sometimes, my brain is just not up to all the science inherent in the genre! So I caught myself over the years steering away from sci-fi and, for some reason, especially space operas. But, having recently read a few space operas that I absolutely loved, and knowing that Adrian Tchaikovsky is a rather renowned science fiction writer, I thought “Why not?” and signed up for this tour.

(Not gonna lie, that gorgeous cover may have had something to do with it, as well!)

Well, not only did I find myself engaged in a fast-paced and thrilling story, but I stumbled across one of my absolutely favorite tropes: found family! We follow quite a cast of characters in this story, but our main focus is Idris and Solace, two war veterans who are thrown back together years after the war has ended. Idris and Solace were both part of the force that “defeated” an entity known as the Architect: a massive alien ship that floated about the galaxy, rearranging planets on a molecular level into, basically, space art and leaving millions dead in it’s wake. The galaxy has known relative peace for years, but, when Idris and the crew he has made a home with discover a vessel that has been “Architected”, everything changes.

Y’all, this book was incredible! Though it had a bit of a slow start introducing the science of this universe, the action picks up fairly quickly and, once it does, the pace is breathtaking. I found myself tearing through this not small book in record time because I just need to know how it was going to end! I loved the author’s writing style, as well. He has a tone to his writing that perfectly matched my sarcastic sense of humor, lol. And he also has a way of delivering emotional scenes that pack a wallop. Which, ya know, I appreciate in my novels.

My favorite aspect of this story, however, has to be the found family element. The crew of the Vulture God captured my heart and I would fight for them! It was such an incredible part of the tale that added an extra something to this beautifully crafted story. Also, the casual LGBTQIA+ representation was much appreciated! And we have a prominent disabled character, as well! Just… the science and the action were fantastically executed, but the characters are the true heart of this story.

Final thoughts: This was a wonderfully crafted and engaging start to a new epic science fiction series! Though it started off a bit slow and could be a bit of a technical slog at the beginning, it soon ramped up into a fast-paced, heart-pounding space adventure that kept me on the edge of my seat! The plot was fantastic and the world-building was great, but where this story truly shined was in its characters. If you enjoy your space opera with a side of beautifully written found family, then I think you would love Shards of Earth!

8 thoughts on “Blog Tour: Shards of Earth by Adrian Tchaikovsky”